So after the joys and distractions of STEAM, closely followed by another foreign business trip, I was finally able to crack on with the AT-AT over the past few days. When I last wrote about the UCS AT-AT build I'd got partway through the 422 building steps required to construct the internal skeleton and body of the AT-AT, and you can remind yourselves of the story so far here.

Before I could jump back into the build, I had a couple of things to consider. First up, should I upgrade to the latest version of LDD ? LEGO have released a new version (4.3.5) of the software, and now every time I boot up LDD I'm asked if I want to download the new version. Normally I'd dive straight in, but given I was partway through building a section of the AT-AT I was concerned about the possibility of the new version of LDD generating a building guide in a different sequence to the one I'd been using previously, meaning I wouldn't just be able to pick up where I'd left off. Also, I'm told that the new version of LDD doesn't like one of Pete's LDD files and omits a couple of pieces from it which have allegedly not been placed correctly (!). All things considered, I decided to hold off upgrading LDD for now.

Secondly, I've had an issue with LDD which appeared when I upgraded my iMac operating system to the latest version about a week ago. Since then, it's been impossible to see the outlines of the pieces on LDD; there's an option to show the outlines within the LDD menu but this is now set to 'off' and greyed out so I can't select it. This obviously makes it much trickier to see how everything fits together. I spent some time looking for a fix, but wasn't able to find anything so eventually decide to just press on with the build and hope for the best. Although now too late for this particular section of the model, if anybody reading this has any idea how to remedy this issue I'd be very grateful. I'm hoping that at the very least I'll eventually regain the ability to see the outlines when I upgrade to the latest version of LDD, but we shall see....

Anyway, back to business. Wrapping up the internal skeleton and body of the AT-AT involved a number of distinct stages - lengthening the floor a bit, construction of the front wall of the body, construction of the rear of the AT-AT, fashioning a robust Technic frame to ultimately support the roof and hang the sides on, and finally attaching all the multiple sub-assemblies that I'd constructed earlier, including figuring out where all the legion of small, individual parts were supposed to attach (see my previous AT-AT posting for a rant about that particular task....).

Completion of the floor and front wall of the body (pictures below - as usual, click to enlarge) was relatively straightforward, in stark contrast to the rear of the AT-AT which turned out to be hideously fragile and unstable until the very end when everything came together. The sizeable black and yellow section attached to the floor is the block which will eventually support the head and neck. A number of subassemblies fit inside this structure and should ideally be installed as you go along rather than at the very end, which is what the ludicrous LDD building guide would have you do.... 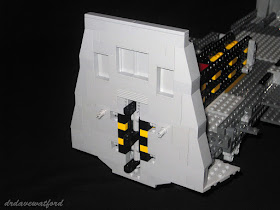 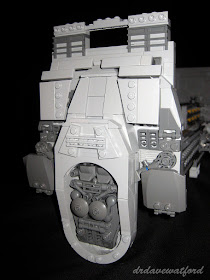 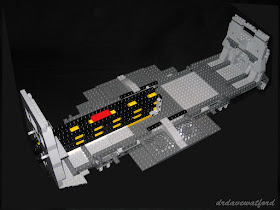 A feature of the LDD file for the AT-AT body is the presence of a number of loose parts and structures which, on account of LDD's idiosyncrasies, aren't shown as being attached to the rest of the body; you can see these leftovers in the bottom left of the picture immediately below. As some of you are aware, it just so happens that I was fortunate enough to have seen cavegod's AT-AT at STEAM less than two weeks ago, so I took the opportunity to grab a few pictures of the rear of the AT-AT (below) while I was there. The pictures are pretty rough, but they were very useful in helping me to complete the rear of the AT-AT and figure out how all the loose bits and pieces are supposed to attach. 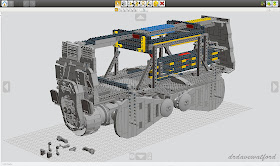 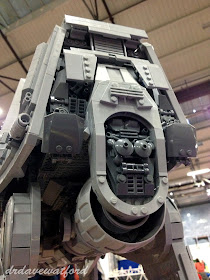 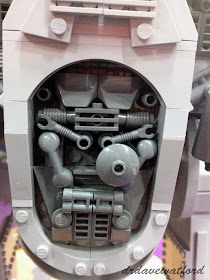 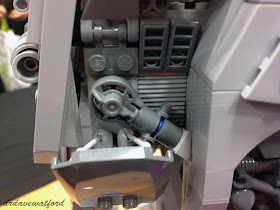 The last major part of the build is the long Technic section (picture below) which bridges the gap between the front and rear walls of the AT-AT body and which will eventually support the roof. Many of the "free floating" Technic pins that I commented on the last time I posted an update ended up being employed in the construction of the uppermost part of this structure, and you'd be well advised to work out where they fit and pop them into place as you go along. You can do this by jumping back and forth between the relevant pages of the building guide and the last page. Yes, it's a total pain in the backside, but it beats trying to attach them when you've finished building everything else which is once again what the building guide suggests.... 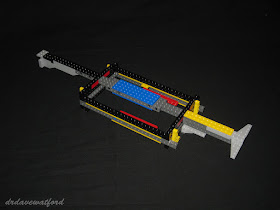 I did my utmost to try and attach the multiple sub-assemblies and loose parts that I'd been collecting together during the previous 421 steps as I went along; all that was left therefore once I'd finally managed to stagger through to step 422 (the final step) of the building guide were a collection of Technic liftarms, the drive motors and the structures to which the legs would attach. The penultimate task was to drop the Technic section on to the top of the body section and knit these sections together (below) with the Technic liftarms.


Last but not least, I bolted the drive engines and the structures to which the legs would attach onto the underside of the body and I was done ! This last step was pretty tricky, but the results are impressive as you can see from the picture immediately below. 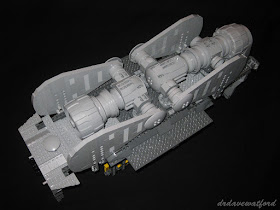 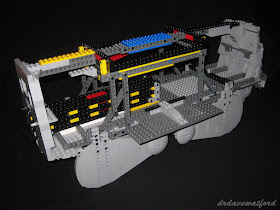 I experienced a real sense of achievement when I finally finished this section of the AT-AT build. Between the horrible LDD building guide and an at-times genuinely tricky build it's been a while since I was challenged this much by a LEGO model. Completing the AT-AT body used up 1,282 pieces, to add to the 2,120 pieces that went into the legs, meaning I'm now well over halfway done overall.

Next up is the neck section, after which I can finally upgrade LDD....